I hacked a windsurf board in big pieces (the tail section became the jaws paipo later on, the nose another paipo) reshaped the tail and nose of the middle section a bit, covered it up in a rather 'raw' glassjob and stuck some wooden fins in (on a too agressive angle).

Teh result is a bright green 4 ft someting 'shortboard' that is super wide, 4 inches thick at least, and HEAVY. Tried it once or twice, never caught a wave on it, got frustrated and threw it in the shed :D

I found i back some time ago and i'm going to have another go on it, it think it deserves a wave, at least one....

Here are some visuals!

The result (oooooh myyyyyyy god i created a MONSTER!!!!):

almost forgot that The Alien got a new bottom graphic for an expo: 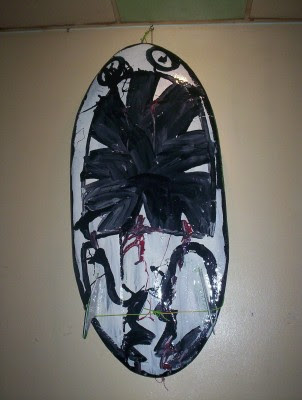